This web site makes QR codes from your input.

What is a QR code?

A QR code is a kind of barcode, similar to those used at shops. The QR code contains more information than the striped barcodes.

What is the size of margin? 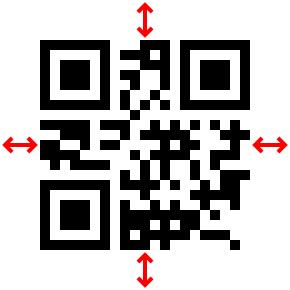 The size of margin refers to the white boundary around the QR code. This is called the "quiet zone". The quiet zone needs to be at least four times as wide as the individual squares (the module size) for QR code readers to work well.

This web site allows you to set the quiet zone to sizes lower than four modules, in case you have already provided a white background on your web site.

The default size of the quiet zone is four modules.

The "Content" box controls what data is put within the QR code. This is what is read back out when you point a reader, such as a phone, at the code.

What is the "Version"?

Version one QR codes can only contain a small amount of information. Version forty QR codes can contain more information. If you don't specify a version, this web site computes the version based on what you put in the "Content" box.

If you set the value of the version to a value which is too small to contain your content, this web site ignores your version value and computes the version itself as described above.

What is the "Level"?

The level of a QR code is the amount of protection against errors it contains. QR codes can correct some errors when they are read. Level one is the minimum protection. Level four is the maximum protection.

What is "Pixels per module"?

A module means one of the small black or white squares on the QR code. You can choose how many pixels on the image each module occupies. The more pixels per module, the larger the image.

You can hotlink the QR codes from your web site. To get a QR code which refers to your site, just embed the QR code like this:

That will automatically generate a QR code containing a link to the referring page. See the "link to this image" page for other ways to link to a QR code.

The QR code is a PNG file

The QR codes on this web site are PNG files with two colours, hence the name "QRPNG". These two-colour PNG files are much smaller than those supplied on other web sites.

Other websites for QR codes

There are a lot of websites offering to make QR codes for you, some of them are ridiculous, asking you to pay if you want to make a QR code which points to YouTube or some other such nonsense. Here are a few which are not too obnoxious:

Doing it the hard way

If you want to generate QR codes "the hard way", here are some software options.